Paques Holding bv, today announced that the contract of its Chief Executive Officer, Rob Heim, will be terminated by mutual agreement in the second half of 2013. Mr. Heim will continue to serve as CEO until his successor is nominated and a transition phase is completed. 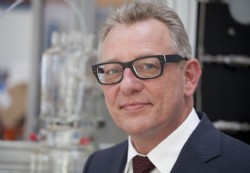 Rob Heim was appointed CEO of Paques in 2006 for a 5-7 year period with the objective to strategically reposition the company. As part of this repositioning, under the leadership of Mr. Heim, the company set up local entities in Brazil, Canada, the US and India and a Joint Venture with Shell (Paqell b.v.) to serve the oil and gas industry. As a consequence, Paques has grown in scope and revenue as well as profitability during his time as CEO. Mr. Heim will hand over the company to a successor who will lead the company into its next phase of development.


The Supervisory Board would like to thank Mr. Heim for his excellent work and his contribution to the strong development of the company and wishes him all the best for his future. The Supervisory Board has initiated the search for a successor who will continue the internationalization of the company and the further development of innovative technologies for the used water and gas treatment market.