The winner of the Lettinga Award 2013, a prize of 25,000 euro, has been announced: Shiva Salek, PhD student from TU Delft, with her project proposal: “Adding value to Anaerobic Digestion technology by production of biobased materials (biocement and fertilizer) and methane enriched biogas using alkaline silicate minerals”. 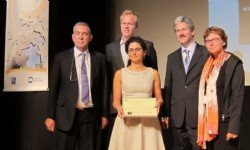 The TU Delft team will investigate the production of biobased materials by the anaerobic digestion (AD) process when applying minerals for CO2 sequestration. The impact on the biogas composition and value will be evaluated as well as the cement quality. The economical values received from production of these materials can further rationalize the costs of CO2 sequestration for climate change mitigation purposes. The winning proposal was described by the jury as: “An elegant combination of anaerobic sludge treatment, biobased product and green gas quality”.

Paques is one of the sponsors of the Lettinga Award, which was initiated in 2001 and is granted every three years. The focus of the call for 2013 was on Breakthrough Innovation in Anaerobic Technology. The winner of the Lettinga Award 2013 was announced at the very successful 13th World Congress on Anaerobic Digestion, that took place 25 - 28 June 2013 in Santiago De Compostela in Spain.